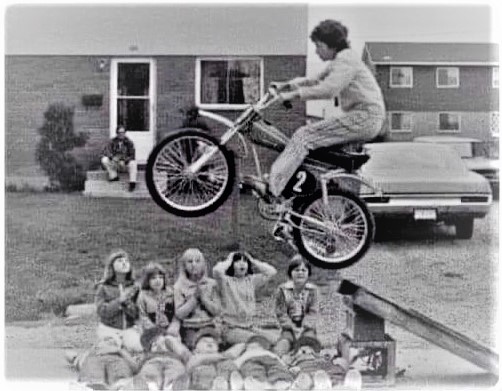 Isn’t that what we all want? To be “Livin’ the Dream”?

It’s pretty subjective, really.  The dreams, I mean. What might be the dream for one, could be utter hell for another. A dream set in  Disneyland with a K-Pop soundtrack would be hell for me. But then again, I’m not a 13-year-old girl.

When I was a younger man, just having the time to ride and a smile from a pretty face was the dream, and I lived it. I was invincible. Immortal. The world lay at my eager feet and I dove in, head first.

I traveled, I rode, and I raced. I stayed up all night, enjoyed music and food from all over the world, and I loved. I loved deeply. Even crushing heartbreak was somehow delicious.

I did those things. I created teams and a home and many other things but none of them felt like they were enough. I don’t mean that in a monetary way or in a way meant to stroke an ego, I mean that although I gained great satisfaction from the process and the eventual creation of the many things I had the good fortune to be involved with, it never satisfied that undefined yearning that I felt.

Then I had a wife. Then I had a child. I had found my dream again. I grabbed it with both hands and I lived the hell out of it.

For years I still rode and raced and loved and I felt a new love that parents know. It felt like everything I had done had led me to that point. I was ‘livin’ the dream’ again, baby!

A decade passed, and then a few more years. In my life, I still had good music, good food, and the kinds of love I, as a younger man, had never imagined, but I felt like somewhere in there I had let the dream slip away. Maybe I had lived all the livin’ there was to be lived in the dream I was living now? I wasn’t sure but I felt that there was still more.

I found myself, once again, between dreams. I could look at my life and see the good things that were there. I took comfort in them but I could still see the possibility of some undefined glorious moments that lay, ready to burst, just beyond the horizon.

That horizon was farther away than it had been before. My steps had grown shorter. Where I had once stridden I now walked at a moderate, and sometimes laboured pace. I was no less determined but the progress towards my dream was tempered.

Like before I was certain that another dream was just there, nebulous and slightly out of reach, but it was there. It was waiting for me to find it again and to live it.

I put my head down and pressed on but something was different. All of my life I had forged on alone. I was single-minded in my purpose. But now, if I tarried or strayed, a hand was there to help me up or to guide me on my way.

Sometimes, it was my wife or my son. Sometimes it was one of the people whose dreams we had lived together. They were there now helping me find my way.

But this dream wasn’t one I needed to find. I was already there. The moment I realized it the music was fuller, the food finer, the love sweeter, and the dream? If you’re here, then you know that we’ve made major changes; We’ve created a new website, changed email and social media platforms, and recycled every product catalog in our office that was more than 10 years old. Easy-Peasy we thought.

The moves were needed and encouraged and we were told, time and time again, by those who ‘knew’ that it would be quick and painless and that we would feel better when it was all over.

Well, they were partially correct. We’re pretty happy with the results but wouldn’t wish the slog on anyone. And it was a slog.

We’re a small company and do many things in-house. This meant learning all new software and letting go of the old, tried, and true ways of doing things that, although familiar and stable, just weren’t doing the job anymore; Like Bob’s cycling shoes.

The cleats were pretty new, there were no tears or any visible damage to the uppers, but they looked weary and sad, and drooped a little as they sat in the corner waiting to go out again and play.

Bob’s riding buddies had mentioned this, a few times, and it had become a bit of a running joke. Someone even suggested starting a pool. Well, not suggested actually, they started one. I had 3 weeks from that day.

But I understood Bob’s hesitation. I’m sure the old shoes felt very comfortable. They were stretched out around the forefoot and didn’t hug the toes too tightly. I’m sure the heel cups had softened up and didn’t rub on the back of his feet anymore. And the cleats were probably dialed and exactly where they need to be. So why change?

It’s probably a good time to mention that we have a dog and a cat. The dog’s name is Joe and the cat’s name is Pudding Head. These two boneheads both love feet – and anything to do with feet. Anything.

You might be able to see where this is going.

Bob came over to have a pre-ride coffee (actually, to wait for me…I was running late…). He came in, took off his shoes, and we went into the kitchen for some jet fuel espresso.

Bob’s shoes lay helpless and unsuspecting by the door. Bob’s shoes, these leathery manifestations of hundreds and hundreds of salt-stained hours sprinting, climbing, and rolling through the sun or driving tropical rains, these worn, comfortable veterans of the road that were soaked well through with the very essence of Bob never saw it coming.

And then it was done.

I had lost the pool. Sabotaged by my own.

So, after much whinging and moaning and wringing of hands, Bob had new shoes. They seemed a little tight in the toes and rubbed at his heels. It also seemed the left cleat was never exactly where it should be. We had to stop once a ride and wait while a 5mm Allen key was produced, and another fine tune happened.

No one griped. We all knew it was a process. We all knew that eventually, they would be just right. But, for now, we were prepared to stop once a ride and wait for 5 for Bob to tweak his left shoe.

Like most things, it was a process. It required some pain and suffering on the front end but, at some unknown point in the future, the shoes would go from being Bob’s new shoes to just Bob’s shoes; The toe box would stretch, the heel cup would soften and the cleats would be dialed in, just right.